Lately, I have had several tiny "meltdowns" when it comes to Diabetes.  Halloween doesn't help it either!!  Imagine how I felt when I walked into Cale's Halloween party, after it has been in full swing for half an hour, to find out that treats have already been passed out and pretty much all inhaled.  You would not believe the amount of, please excuse my language, CRAP that they were given to eat!!!  I wouldn't even have eaten all of it myself...not at one sitting, at least!!  Brownies with frosting and sprinkles, huge sugar cookies topped with frosting, powdered doughnuts (really?), small cupcakes with sugar cream frosting, trail mix, candy and huge, where's the keg, plastic cups full of fruit punch!  Thankfully, I packed Cale a water bottle with sugar free lemonade mix to drink.  That didn't stop him from eating everything!  I had already told him when I would be at the party and to test if they were to eat before I arrived.  He did, he told me what his BG was and then told me what he ate.  I stopped counting at 90 grams of carbs and gave him his shot, with every intention of rechecking in 2 hours and correcting as needed - thankfully it didn't turn out to be too much of a correction.  Needless to say, he was WOUND UP for the rest of the day and then he crashed way earlier than normal.  He also complained of a stomachache.  Hmmmmm.....wonder what that would be from?!

So I was really annoyed at the amount of junk they were given to eat.  I felt horrible that I had to be so concerned.  I didn't take it out on him, after all, he was just being a 9 year old boy.  I did tell him that it was way too much for anyone and for the next party, he is to eat one thing and bring the rest home.

I hate having to tell him that.  I hate these feelings of why can't he just be like everyone else.  I hate hearing that some kids have teased him about having Diabetes - oh how I hate that - that has been the cause of many tears lately.  I hate that I worry all of the time.  I hate that I have to read about the 13 year old girl that died in her sleep last week because of Diabetes, with no real explanation as to what really happened.  I hate that his sleep has to be interrupted every night to test his BG - although, he seems to sleep through it, but still stirs a lot when I fish his hand out from under the blankets.  Then, if he's low, he does have to somewhat wake up to drink/eat.  But it needs to be done so that he will wake up in the morning. I hate that he can't join the military because of Diabetes (ok...that I really don't hate, but for his sake, I pretend).  There are so many things I hate about this disease, but I realize that I need to have these feelings. And, I need to keep these feelings away from him.  I can't let him feel like he's a burden in any way, shape or form, because he is NOT!

Deep down, however, I can't help but really like the comments that I receive about how I am caring for Cale.  I thank those that give me these compliments.  Their words give me so much encouragement.  It helps me realize that I am doing everything that I can for him.  And I know that if this was their child, they would do the exact same thing that I am doing for my child.  That is our job.  There is no question as to what needs to be done.  We just do it.  Sure, we have our moments.  But, we would have moments with completely healthy children (you have met Ryan, right?).

I was reading another blog from a mother of a child with Diabetes and she posted the following poem, that made me cry, in a good way....

Most women become mothers by accident, some by choice, a few by social pressures and a couple by habit.


Somehow I visualize God hovering over earth selecting his instruments for propagation with great care and deliberation. As He observes, He instructs His angels to make notes in a giant ledger.


Finally He passes a name to an angel and smiles, "Give her a child with Diabetes."


The angel is curious. "Why this one God? She's so happy."


"Exactly," smiles God, "Could I give a child with Diabetes to a mother who does not know laughter? That would be cruel."


"But has she patience?" asks the angel.


"I don't want her to have too much patience or she will drown in a sea of self-pity and despair. Once the shock and resentment wears off, she'll handle it."


"I watched her today. She has that feeling of self and independence that is so rare and so necessary in a mother. You see, the child I'm going to give her has his own world. She has to make him live in her world and that's not going to be easy."


"But, Lord, I don't think she even believes in you." God smiles, "No matter, I can fix that. This one is perfect -she has just enough selfishness." The angel gasps - "selfishness? is that a virtue?"


God nods. "If she can't separate herself from the child occasionally, she'll never survive. Yes, here is a woman whom I will bless with a child less than perfect."

"She doesn't realize it yet, but she is to be envied. I will permit her to see clearly the things I see...ignorance, cruelty, prejudice....and allow her to rise above them. She will never be alone. I will be at her side every minute of every day of her life, because she is doing My work as surely as if she is here by My side".


"And what about her Patron saint?" asks the angel, his pen poised in mid-air.


God smiles, "A mirror will suffice."

Now, those of you that really know me, know that I am not an overly religious person.  I do believe in God and we try to instill this in our boys.  I can tell you right now, I am going to make sure that we do that even more.
I may have my moments and I do wallow in them (and I thank all of you that allow me to breakdown to them and help me through those moments), but they don't last too long.

I watch Cale play, I hear him laugh, I see him enjoy so much and I realize, this is how it is supposed to be.  I do what I do, and deal with what I deal with, all so that he can have his childhood and grow to be the person he is destined to be...no matter what life throws his way.

On Saturday, October 16th, Team Cale once again "Stepped Out" to Fight Diabetes.  It was a beautiful day!  The walk was in St. Charles, Illinois.  It started out along the Fox River and wound through some wooded areas and then back along the River.  It was such a nice walk!  I love the Fall and with the water and the changing leaves, things couldn't have been nicer!!  The walk was 5 miles long and we all made it!

Team Cale was announced during the opening ceremonies as not only a new team to this walk (the previous walk we did was in Rockford) but we were also one of the top 5 fundraising teams!!  That felt really good considering how many people were there!!  As of today, Team Cale has raised $3,280!!  And we can still send in any late donations until November 5th!!!

Team Cale consisted of Me (of course), Pat, Cale and Ryan, my Mom and Dad, Lauren and Kevin, my cousin Jenny, Cale's best friend Ryan and my mother-in-law and father-in-law (they were there in spirit...they helped fundraise, but were unable to do the 5 mile walk due to a brand new knee!!!).  What I found funny is, during the walk, the ones that were "tired" and "hurting" were the two 9 year olds and the 6 year old! Where was the energy that they have ALL OF THE TIME?! Granted, Ryan's little legs had to take almost twice as many steps as the adults, but he is always on the go at home and doesn't have to rest!  Ahhhhh!!!!

My very talented sister-in-law, Chris, graciously designed our t-shirts again this year!!  Everyone had the Army star logo with "Team Cale" on the front and the little boys had their names military style on their backs (which made my "big" boy want his, too!).  We love the t-shirts!!!

Here are some pictures of our day... 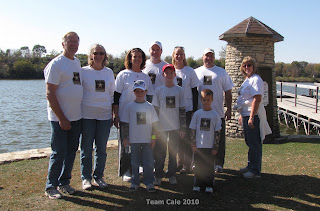 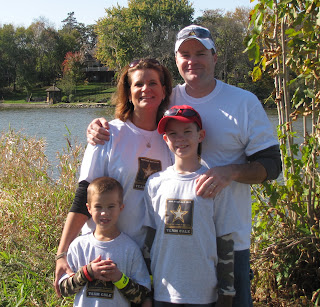 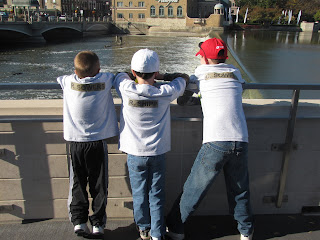 The boys watching the waterfall...check out their names on their backs! 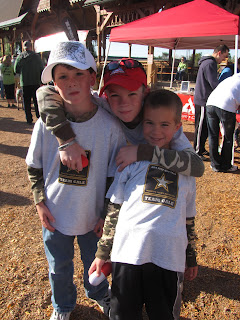 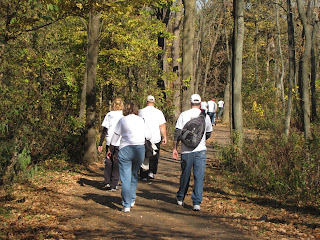 The path winding through the "woods" 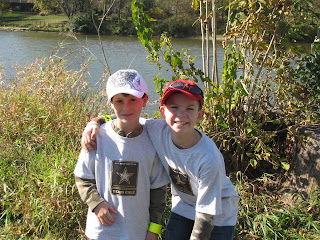 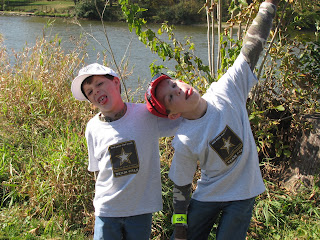 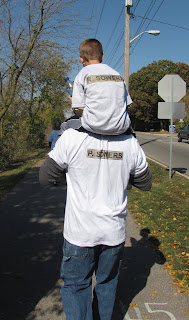 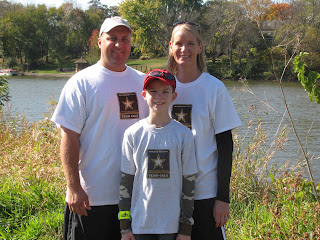 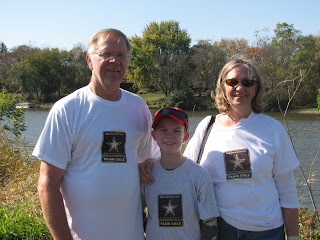 Cale with Grandma and Grandpa 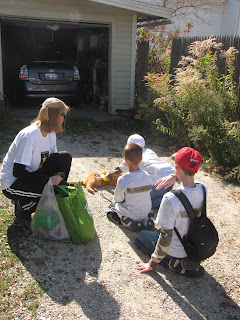