AFTER SPRING BREAK!!!!!! Seriously! Cabin fever has totally set in! There are only so many forts to be made, movies to be watched, games to play.... I even looked into going to the movie theater, but there really isn't anything out for the kids to see. If Hollywood were smart, they would have released that new monster cartoon movie last week instead of this Friday. They would have made A LOT more money this week with a lot of kids off of school. I know we would have gone. This is nuts.
At least tomorrow, Ryan is having a friend over to play (his first from school - up to this point he has had to play with Cale and his friends - totally not fair to either one). Turns out his friend Bryce goes through the same thing with his big brother and there are only girls around his house to play with, just like here. So that will be fun for Ryan.
Then on Thursday, we are going to go over to Miss Trista's house. She is having a garage sale and the boys will help keep her girls occupied. It's been a while since they have been able to play together.
That brings us to Friday, what to do...what to do. Maybe I can get them their eye appointments for that day...WHAT FUN!!!!
So rain, go away. There are bikes to be rode, holes to be dug, balls to be thrown...ALL OUTSIDE!!!
Posted by Andrea at 4:03 PM 1 comment:

It's official...Ryan turned 5 years old (last week - I know people, I'm slow, but as you can see by the date, I did try and post the next day)!! A whole hand!! He is getting to be such a big boy, when he wants to, he does still carry his rag of a blanket wherever he can.
On the Sunday before his birthday, we had people over (those who wouldn't be able to come on Tuesday - his real birthday). We had dinner and cake and presents. His cake had dump trucks on it (his choice) and his presents consisted of Legos, legos, legos, clothes and legos. (I wonder how that stock is doing?) He had a lot of fun, as you can see in the pictures. 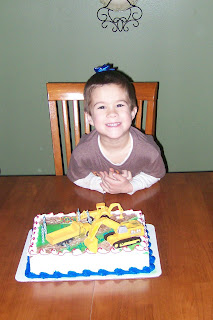 Ryan and his Construction Cake 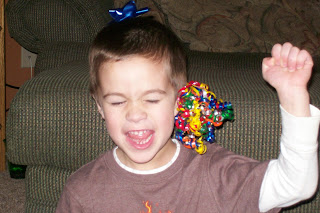 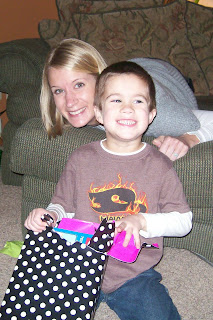 Then came his real birthday on the 3rd (he loved that he had more than one). He had a fun day. We played, he went with me to Cale's school for recess/lunch duty so he was able to play with the bigger kids on the playground. We went out for lunch to McDonald's - his choice. Then when Cale got home from school, Ryan opened his present...Legos. After Daddy came home from work, Grandpa, Uncle Steve and Auntie Lauren we over. We had pizza and cupcakes and he opened his presents...even more Legos. Oh and all of the gift cards he received also went to Legos!! 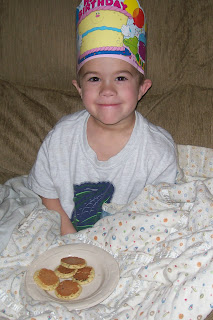 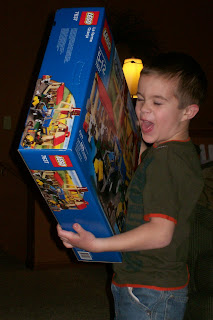 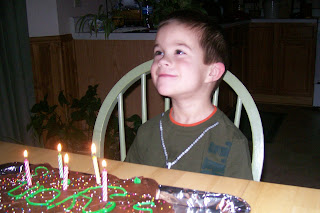 
Now that it has come and gone, Ryan loves to tell people that he is 5. It's weird, since last week, several people (checkers at the store, teachers at Cale's school) have asked him how old he is and he proudly says FIVE!!

Where has the time gone? I have found myself taking him out of the car and carrying him more. Soon I won't be able to do that - look at Cale, that kid is up to my shoulders, I couldn't carry him without needed my orthopedic doctor! Maybe I should have another...yeah right!!!!