Thanksgiving is over...the Christmas season can now officially begin. Not like in the stores where there have been Christmas trees and decorations up along with Halloween costumes. The boys and I have been having fun driving around and yelling at people who have their Christmas lights up AND ON (up is ok, I understand doing that when the weather is warmer - just leave them turned off!!!). Some people have had their trees up for a couple of weeks already. One holiday at a time people!!!

Our tree will be brought up from the basement at some point today and we will figure out where it will be placed this year.

Ryan already thinks it's Christmas. He really doesn't understand we have almost one month left to go still. To be a kid again!!!

I hope everyone's Thanksgiving was relaxing and tasty. But now the fun begins!
Posted by Andrea at 8:19 AM No comments:

We hope you all have a great Thanksgiving!!
Eat a lot and enjoy everyone!!
We are going to Pat's parent's house for our dinner and then off to the nursing home for dessert with Grandma. We have even talked about going to see a movie later on with the boys. AND...Lauren and I may brave it and go to the outlet mall at midnight for a goodie bag and cheap shopping (in our pj's no less)!!! 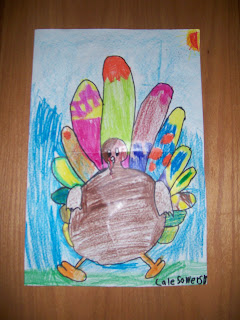 he was a little bummed that the "special" turkey picture was put on the blog. Cale actually drew this entire picture. It wasn't traced or just colored. Not bad if I do say so myself. 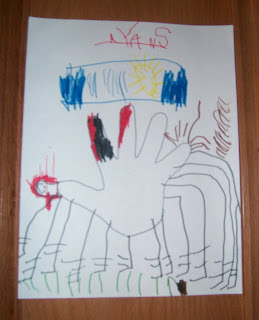 ...would draw a picture like this.
Ryan drew this picture of a turkey, in pre-school, that has 13 legs and is pooping. And YES...he is VERY proud of the fact that it is pooping.
I even received an e-mail from the teacher in regards to this. Thankfully, she not only has a sense of humor, but two small sons at home as well.
What is it with males of all ages and bodily functions???
I guess I shouldn't be surprised by the pooping, but by the fact that it has 13 legs!!!
Posted by Andrea at 4:55 PM No comments:

There is hope...please scroll down to the list of blogs that I follow and click on "Six Until Me" and read her November 17th post and watch the video (Lauren, you will need sound). I cried. Keep hoping and praying that this is a step closer to finding a cure.
Posted by Andrea at 8:18 AM No comments: 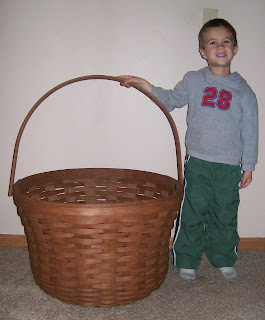 It is a Longaberger Basket...it is HUGE (I put Ryan in the picture for comparison - he picked out his own outfit today - remember he is part Polish)...it was free (but probably worth about $500 - and I have been forbidden to list it on e-bay)...it is beautiful...it is mine (fair and square Mom - aka Mario, there was no cheating involved)...and I have no idea what I am going to do with it.
Any suggestions???
Posted by Andrea at 6:47 PM 2 comments:

It's World Diabetes Day!!!
Show your support for all of those affected by diabetes~
wear your blue clothes...we are!!!
Posted by Andrea at 12:00 PM 1 comment:

We are going to give it another shot...

(no pun intended)...asking our endocronologist about the OmniPod that is. We had our monthly support group meeting last Thursday and the OmniPod rep from our area was on hand with samples, paperwork and enough information to choke a horse.


In case you are wondering what I am talking about, the OmniPod is a tubeless insulin pump that Cale REALLY wants. Here is what the "PDM" that programs the pod(and has a built in glucose monitor) looks like as well as the "pod" itself:

Last visit our doctor vetoed it saying they didn't have enough experience with it and that it will end up wasting a lot of insulin. Well, it turns out (according to our very nice rep) our doctor has several patients on it and there are at least two people in his office that are completely trained in using the pod. As for wasting insulin, I waste a lot each month any way when I have to throw out the rest that is left in the vial because it has been "opened" for 28 days.

The rep had several of the pods on hand that the kids were able to put on and see how it felt without actually inserting the cannula (the needles were removed). Cale wore his for a full day (including going to school) and had said that he had forgotten it was on. Well, the rep also had a couple of pods with the needle included. I (being the brave one of the moms) offered to try one on. All I have to say is that if I ever get diabetes, I would want this pump from Day 1. Checking my blood sugar on my finger hurts more than inserting the cannula. I am not kidding. I wore the pod (filled with saline) for a full day. Had my arm not brushed up against it from time to time (I wore it on my stomach) I would have totally forgotten all about it. I sleep on my stomach and it didn't affect me in the least. Removing it was painless!!! Bandaids hurt more to remove. Pat wore one like the kids for a day and his only complaint was that it left some sticky stuff on his skin (however, he didn't use the wipe that came with it to remove it all). He even wore it to his class on Saturday and had forgotten he had it on.
Let's keep our fingers crossed that Dr. Carrion finally agrees to Cale getting the OmniPod. Actually, he will be getting this pump if I have to chain myself up in his office until he agrees!!! Trust me, no one wants that!!!
Posted by Andrea at 3:29 PM 1 comment:

It's not his first and it DEFINITELY won't be his last! 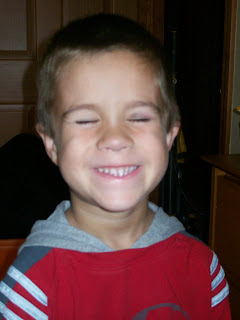 Here is Ryan's latest war wound (payback from Cale from when Ryan hit him in the head with a golf club requiring stitches). It was a good one when it happened on Halloween. This picture was taken about 5 days later!! Ahhh brothers!!!
Posted by Andrea at 11:46 AM No comments:

Halloween Has Come and Gone!!!

May the force be with you Bat Man!!! 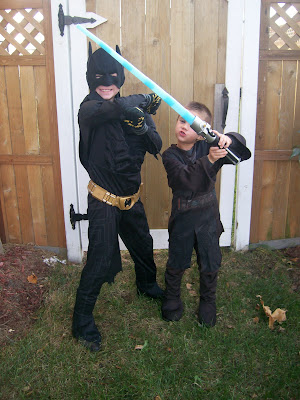 I didn't know that Anakin Skywalker was so cute!!! 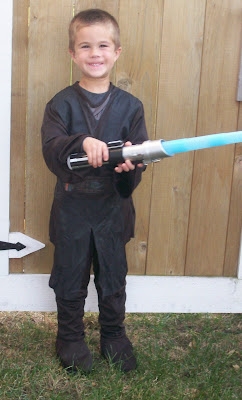 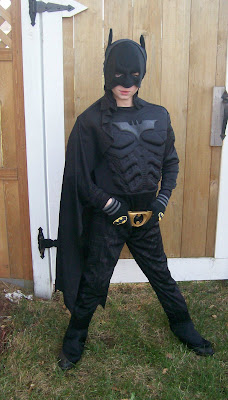 The boys had a blast on Friday!! We went trick-or-treating as soon as it was time. They went for about an hour and then decided that they wanted to hand out the candy at our house for a little bit. Fine by me...I made dinner while they did that. Daddy came home, we all ate and then went back out to trick-or-treat some more...in the dark!!! A couple of houses in our neighborhood went ALL OUT!!! Car accident scenes, chain saw guys, guys hidden inside boxes by the front door to scare the poop out of kids.
Once we got back home, they went through their loot and choose their favorites to keep and the rest (and there was a lot) was traded for a toy. Not a bad deal for them, however, not so good for my waist line!!!

Earlier in the day, I hosted Cale's party at school (note to self...next year, volunteer to be room parent for Ryan and for the following years, donate stuff for the parties. They are crazy!!!). The kids had fun. We made spiders out of egg cartons, pipe cleaners and crazy eyes. We played a mummy wrap game. We had face painting. There were a ton of snacks. And, what I think the kids liked best was Frankenstein's Laboratory (thanks for the poster Auntie Lauren! Cale took credit for it and kept it!!). I labeled five boxes as brains, hand, eyeballs, toes and teeth. I put a hole in the top of each box for little hands to fit in and underneath I put things that felt like those items. Teeth were dried beans, toes were little carrots, hand was a rubber glove that had slushy water inside, brains were cooked egg noodles and the eyeballs were peeled grapes. The eyeballs and brains were the biggest hit. The boys wanted to keep touching it and the girls were afraid. Of course, once I showed them what everything was, they all acted tough!!!

Now it's time to start planning for Christmas. HELP!!!!