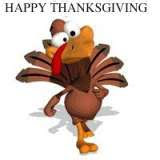 We hope that everyone has a happy, filling, safe and restful Thanksgiving!!

By the way, to all of you you who live where the sun is the "norm", we woke up to snow on the ground.  Not enough to do anything, but the grass was covered!!!

Basketball, week 3 brought on some new techniques and more drills.  Cale loved it!  He has done great with dribbling, but has started getting better at bouncing from one hand to the other.  They had some dribbling races and, for the most part, he kept pretty good control of the ball. (If I could figure out how to download videos, I would have several here...but the little icon that I need is not on my tool bar - what's up with that???)  Cale has also been working on shooting.  Sometimes, he is too far under the basket, but his "coach" really works with him.  Once Cale is shown how to do something, he heads to the back of the line, waits for his next turn and when it is his time, he does EXACTLY what the "coach" told him last time.  It is so cute.  Ah...the memories of high school and basketball games!  Walking into the gym brings about a smell that makes me feel 17 again!!!  I don't know if that is good or not.  Especially since I am bringing my 8-1/2 year old son to play basketball.  There is not a lesson this week because of Thanksgiving.  Cale was really bummed about that, especially since this would have been the only Tuesday that Daddy wasn't teaching and would be able to come and watch.  But, Daddy surprised him and was able to get next Tuesday off so that he can come and watch.  Now he is a happy boy!!! 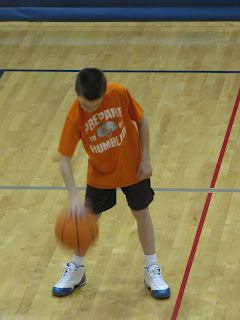 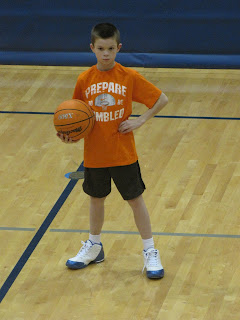 Nike ad...even though he is wearing FILA.


Onto Hockey - Week 5.  Unfortunatly, due to circumstances beyond my control (and if you know Ryan - you completely understand) there was no Week 4 hockey.  But, skipping one week really didn't do Ryan any harm.  He went out onto the ice without a chair AT ALL!!!!  He took off!  Pat would skate to one side of the rink and Ryan would make his way to him, stick in hand.  Oh, of course he fell.  That ice is slippery!!  If you could see my vidoes (I know, I know) you would be surprised at how good he did.  You would also get to see Pat almost fall!!!  And, we realized that those of us in the bleachers need to keep quiet when Ryan is on a roll.  Every time, and I mean every time, Ryan was going at it, we would make a positive comment and BAM onto the ice he would fall!!!  He was pretty wiped out after this practice.  Unfortunately, lessons on Friday night, after a very long week of kindergarten, takes a toll on a little man.  He also banged his elbow up, but once we left the rink, he forgot all about it.  He was still very pleased with his sweaty hair after taking off his helmet.  Only one more week left of this lesson (next week because of Thanksgiving) and he is done until January.  Although, according to him in the car after this past week, he's all done.  Not so my man, not so.  He is doing good and always wants to go, he just gets tired.  Who wouldn't???

Cale had his second basketball lessons today.  He had so much fun!!  He started out with dribbling and doing some practice drills.  Then they learned guarding.  The boys were paired up and showed how to guard each other.  Well, I don't think that Cale knew that basketball ISN'T a contact sport.  He was grabbing kids and pulling them down to get the ball.  Kinda funny.  Then he figured it out.  No contact!  Once that was established, he did great!  The kids were split into teams and had a little scrimmage game.  He made 3 baskets and was awesome at rebounding!!

It was really cute to see the kids playing.  Some would get the ball and just start running, without dribbling the ball.  Some tried to guard their own teammates (Cale included).

Cale said that he had a great time!  I really hope that the fun continues because I really think he will do well in this sport.  Now to just figure out how to handle his blood sugar during this time.  He dropped very quickly tonight.  But, he downed about 4 glucose tabs and was good to go.  Next week, we will try something different.  Just not sure exactly what I will do.

Oh, and I am sorry there are no pictures.  I did have the camera with me, I just totally forgot while watching the kids play!!!  Next week!

Friday was Ryan's third week in chair hockey...only now we just call it hockey because, as you can see, he doesn't have to use a chair!!!  Of course, he still had some spills, but overall, he did pretty good.  AND, he doesn't get discouraged!!!  In a couple of weeks, he will be out-skating Daddy!!!!  His favorite part of the night is taking off his helmet at the end so that he can show off his sweaty hair!!! DORK! 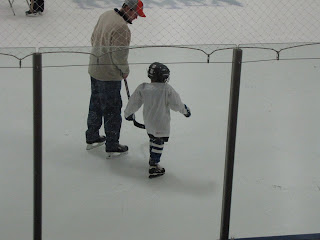 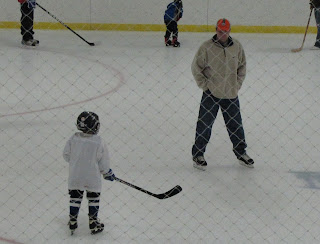 Getting ready for the puck to drop!!

I really thought that I had a lot more pics from this week, but I actually have a lot of video.  I really need to figure out how to post those, they don't seem to want to load for me!!!

Posted by Andrea at 6:06 PM No comments:

Cale had his first basketball lesson last night at the YMCA.  At first, we weren't sure if he was going to go because his Blood Sugars were running really high.  He had even come home early from school to help get them down (they are now down and looking good).  We had changed his pod and he lounged around the rest of the afternoon and seemed really tired.  But once we got outside and were on our way...look out!!!  Fresh air is amazing!

Cale is the oldest in his group.  The ages for this class are 6 - 8 years old.  He is also the tallest in the group, but no surprise there (I could tell that his teacher was really excited about that...he kept mentioning it and even commented that he would have to raise the net to accomodate him!!!).

He did really good!!!  He kept control of the ball while dribbling.  He was shooting really good and was hitting most of the practice lay ups!  He commented that he really had some trouble bouncing the ball from hand to hand while standing still.  I told him that is why you practice.  Daddy has just cleaned the basement and there is plenty of room to practice all types of dribbling!  He's all for it!

He told me this morning that he really had a good time and cannot wait until next week. I am so glad. I hope he continues on! Another signing bonus to help with Mommy and Daddy's retirement!!! Who could ask for more????? 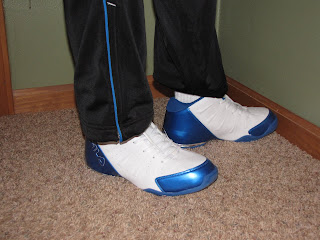 The shoes...once they are paired with Basketball attire...not so bad! 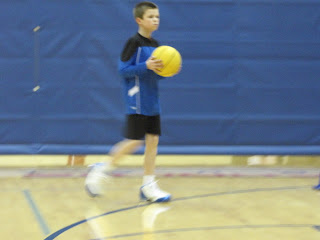 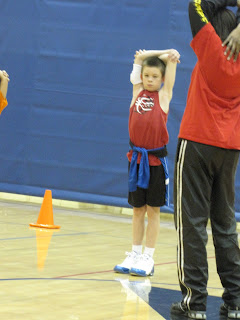 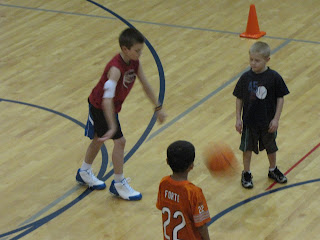 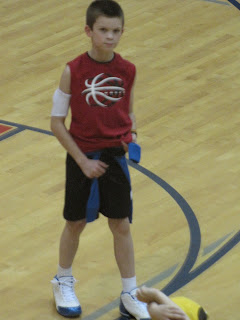 Better pictures will be coming in the next weeks...

Hallween has come and gone!!  Here are a few pictures of the boys...they didn't last very long with trick or treating...IT WAS FREEZING and windy!!!!!!  But they had fun! 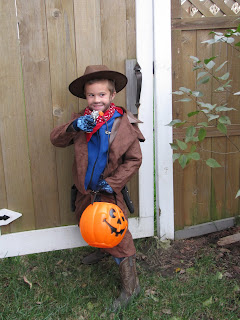 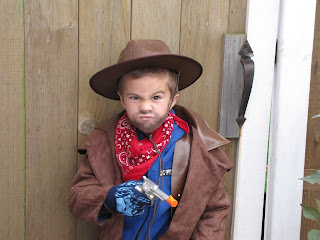 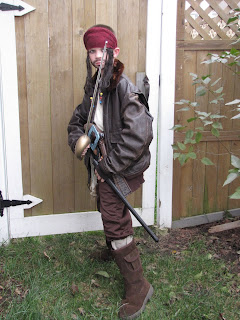 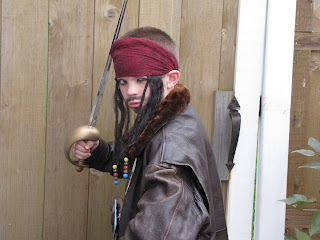 Is it wrong that I think he looks good with eyeliner????